Why Return to Fair Baudrillard?

As with all theorists and their theories, Baudrillard and his work must have significance if they are to stay within the larger discourse, and Badrillard certainly accomplishes that.

Baudrillard’s Influence Spiderwebs in Many Directions

Early in Baudrillard’s career, his interest in the production and reproduction of media (and, later, electronic media) and commodities placed him in conversation with Marxism, though more so with post-Marxism: “Revisiting Marx’s theory of Infrastructure and Superstructure, he argues that those who control the mode of production are able to shape social consciousness; the ruling ideas are propagated, maintained, and originates from the ruling class, who clings to their class interest, in order to maintain the status quo” (Mendoza). Once he began laying out ideas for how the “real” is being emptied and replaced by simulation and simulacra, Baudrillard became one of the largest speakers for the postmodern movement. Reality, especially as the digital age started to emerge, is finding itself increasingly in competition with the hyperreal. We are replacing the “real” with reproducible representations that come to embody signs rather than true references. By being drawn to places, events, and people who are “more real than real,” the lines between imagined and real blur in ways that make it hard to distinguish between them (though this is not always the case). This occurs in the creation and analysis of rhetorical spaces like advertising, politics, and tourism, among others. A really good article, titled “What I Instagrammed VS. What Was Really Happening, or My Entire Life is a Lie,” that surrounds one individual’s experience of living as a hyperreal citizen (though I am not sure she’s aware that she is such) documents how social media sites like Instagram allow users to shape a public image of themselves that is “more real than real.” From this perspective, we are a society increasingly obsessed with the hyperreal, letting what is real slide off to the side and poked every once in a while. Except that, for Baudrillard, there is no reality any more. 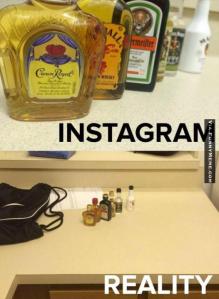 Hyperreal citizens helping the cause. Image hosted on the site Funny Meme.

I find the most interesting discourses surrounding Baudrillard’s concept of hyperreality and simulacrum to be in reference to movies and his analysis of Disneyland. By looking at the ways in which the “real” is starting to blur into the imagined, with the hyperreal promising an experience that is “more real than real,” our relationship to media, traditional and new, is enhancing our own positions as hyperreal citizens in a world that is increasingly dependent on signs and representations than on the concrete. One essay I read revolved around the Back to the Future film series and our reactions as audience members:

“Marty travels into a kind of reality which is at once history, myth, and cinema, but if we laugh at the absurdity of Marty’s situation, it is only because we recognize a comic variation of our own daily experience as hyperreal citizens. Simultaneously, we can distance ourselves from Marty’s predicament, turning off the DVD player to return safely to the ‘real’ world, where time is not so chaotically intermixed and identity really is rooted in a history of things that have happened and will always have happened. The depiction of Marty’s hyperreal adventures as a cartoonish fantasy deters us from recognizing the extent to which our everyday lives are hyperreal. In this sense, the installation of Back to the Future: the Ride in Universal Studios at Disneyland is particularly fitting… Back to the Future: the Ride zaps the rider into the Future movies in the same way that Marty was zapped into his own movie” (Ni Fhlainn).

**The video is a little shaky in the beginning (if it makes you feel a little motion sickness, you are not alone).

With this argument about hyperreal and Back to the Future, it is fascinating how there are multiple levels to the hyperreality of the situation. As we watch the films, we are bearing witness to Marty McFly as a “hyperreal citizen,” while also acting as hyperreal citizens ourselves. The film may be science fiction in that Marty can travel in time with(out) Doc, but the absurdity we see playing out in the movie is a critique of our own views of history. Marty’s disruption of the timeflow makes it feel as if our own perception of history as a linear thing is “real,” blinding us to the idea that history is in no way linear. We are rewriting our conceptions about events in the past just as those events are shaping how we see events in the future. As Baudrillard says in The Illusion of the End, we are constantly revising history, whitewashing it of its meaning to, essentially, smooth out its edges. Marty McFly in the film, though, is literally rewriting time by going back and forth, and engaging with people he should never been allowed to meet but has the chance to anyway. By laughing at the films and categorizing them as just fiction, we place ourselves at a distance to the parallels with our own “realities.” And, by being able to physically go and enter a space that is influenced by realities depicted in the film series Back to the Future, that hyperreality is intensified. We become as characters in the space of the ride as Marty is in the space of the movie, once again blinded to how our own ideas of history are not “real” either.

Baudrillard’s ideas of simulacra, simulation and hyperreality play out most consciously in the Matrix films, with overt links and references to his text Simulacra and Simulation tied throughout the film.

**As a side note, there are others who look to Baudrillard’s work on simulation and simulacra with a more religious lens, with some analyzing him and his work by considering him “as a theological thinker; more specifically, as a negative theological thinker”: “Baudrillard implies that this paradoxical tension between God and the image of God grounds our cultural world, our whole complex system of symbolic reference. Formerly, in the form of an otherworldly passion and energy, it erected cathedrals and marshaled crusades; in the present, it still drives our cultural systems, more madly than ever, though now in a kind of negative reaction-formation, displacing into an ever deeper simulation our radical sense of lack and disappointment in the wake of the death of God” (McCullough). I honestly do not know enough about theology to poke that sleeping bear, so I am going to quickly and quietly sneak away from this topic.

As a someday-to-be Video Game Studies scholar, all roads lead back to video games, and Baudrillard is a worthy road to travel down. According to Eva Kingsepp, “To describe the virtual worlds of digital games as hyperreal and simulacra has become almost a cliché. The perfect copy without an original, complete and even flowing over with signs adding to its real appearance but simultaneously disguising a basic loss of referentials—many of the games can be looked on as substitutes for the real world (if there is such a thing).” We see this in all genres of video games, from sports games like Madden where players can take on avatars who are more perfect copies of their favorite athletes, to cooking simulators like Cooking Mama where players participate in food preparation with recipes that are stripped of their cultural context, to first-person shooters where players can defend against each other as well as aliens and enemy soldiers in worlds that are “perfect” environments based off spaces found in real life. As simulations, video games can offer players a chance to participate in worlds with avatars that lend themselves voluntarily to Baudrillard’s notion of the hyperreal. Marshall Soules touches on this with regards to the digital game The Sims: “Maybe you’re one of millions of North Americans who uses a computer and an internet connection to participate in an online game like The Sims. You’ve chosen your avatar–your personal representative in cyberspace–and you spend hours interacting with other avatars in a simulation of social interaction. You’re convinced that the community you participate in is just as real as the RL (real-life) community you join for classes or sports. Again: you’re in virtual reality.” The Sims, though, is not the best representative of players engaging in a hyperreal space, since there are others like Second Life that give players an experience that is “more real than real” and even boasts advertising from companies that exist in the “meat space.” The game offers a world in which a player can customize his/her public image in the body of an avatar, while interacting with others in a space where it is promised that anything can happen. Relationships emptied of social and cultural context that are packaged in the meat space with identifying cues of appearance (clothing brands, age, sex, race, class), mediated by the technology of the computer. These virtual, simulated spaces craft a new rhetorical context in which players can take on roles as virtual hyperreal citizens.

A little advertisements while you play in the virtual world. Image hosted on Wikipedia.

For every which way we turn, more paths open before us

2 Responses to Why Return to Fair Baudrillard?

Creating Stories is My Story

Unleashing my imagination...will it frighten? Intrigue?

Our Piece of Their World
Dawn Wink: Dewdrops

Musings, insights, and advice on the written word for writers and readers from an aspiring novelist, published writer, and English teacher...whose dogs run her life

Narrative in games and new media

Your creative resource for teaching English in Japan

Druidry in the Modern World - My Journey

Writing and Other Adventures

bitching for a better tomorrow

An independent video game studio in Portland, OR

"Let me live, love and say it well in good sentences." - Sylvia Plath

Thoughts on fandom, academia and the PhD process