As part of our Canonical Text project, My classmates are required to comment on three projects. This isn’t a regular blog entry for reading notes; it’s just to make it easier for my professor to find that I’ve actually done the requirement.

I swear I’m keeping up in the marathon dash to the end of this semester. Image hosted on the site Smosh.

I really enjoyed her sections on the summary and broader influences of Haraway’s text. I’m not sure if her actual presentation covered the definitions of her key concepts or how Haraway connects out to our class since the link didn’t work for me, but I did wish those sections had been fleshed out within her blog space as I am curious to see what each of the terms meant in the scope of Haraway’s argument (though some of the terms were familiar and I could probably guess what Haraway meant when she mentioned them). Sarah did a good job with the brief summary, linking it to her previous assumptions about cyborgs and how that affected her readings of Haraway’s really dense text, especially as she tied it within Star Trek’s exploration of the Borg. The broader influences section provided an interesting read as well because Sarah did brief annotations of how other scholars were viewing Haraway’s work, giving a perspective on how the text can be used and what the limitations are.

**One thing that made me especially curious during Sarah’s summary was of the tension and negativity that seems to accompany the word “cyborg” in Western culture. As someone who grew up watching anime, I had a very different image come to mind than the Borg from Star Trek. Cyborgs are a very popular character type in anime, and their roles range anywhere from assassins to crime fighters to maids, and are the subject of terror, awe, and dirty jokes. From what I’ve seen, many cyborg characters in anime are female with very human appearances, which differs from the Western idea where the synthetic enhancements tend to be more visually pronounced. What is the root of the differences in tone between the US and Japan’s imaginings of the cyborg? 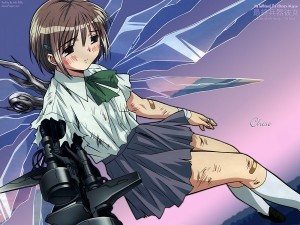 Chise from Saikano as a cyborg. Image hosted on Zerochan.

I really enjoyed how clear and concise Ramona and Camille were with their report, especially with the key concepts. I feel like I understand the concepts of remediation, transparency, and immediacy better, though I am resistant to the example of video games and immediacy since a gamer never truly forgets he/she is playing a game (gaming software still requires a physicality that reminds us that we are playing on a platform or on a computer, so there is no seamless immersion). Beyond that resistance, I found it very helpful that they included a link to a Google Scholar page that looks at the quantitative influence of Bolter and Grusin’s work in the works of others. I would have been interested to see more in the “Importance to the Field” section and the claim that “we make assumptions of our audiences and we risk failing to effectively communicate” if we fail to take remediation into account, but what happens when there is too much emphasis on remediation at the cost of looking at how unique/innovative a new medium is? The two articles they draw upon that use the work of Bolter and Grusin were interesting, especially the summary of the article that looked at remediation through the sense of touch. I really appreciated Camille’s section on Terminator, Star Wars, Marvel, shopping, and selfies/professional photography as it gave further insight on the progression of hypermediacy and remediation in our culture, especially in our entertainment.

Chvonne’s report was very thorough, with her chapter-by-chapter summary giving readers a sense of the scope Manovich was attempting in his work to theoretically ground new media. I really liked that within her section on Manovich’s idea of new media versus popular perception that she discusses aspects of the computer as new media that are often ignored or glossed over at the time he was writing his book: “The computer is ignored for its media production and media storage abilities. Manovich points out that unlike other media revolutions, the computer media revolution impacts all parts of communication and all types of media…Printing press, television, radio, photography, and film are examples of old media that put information out to the public. During this time, computers were used for tabulation and to keep records, such as census data. The convergence of these two functions formed new media.” Yes, computers can do pretty stuff, but they have also helped reshape how we think of communication, production, and distribution.

One thing I really appreciated with Chvonne’s report was her moving through the key concepts, especially with the concept of “interactivity.” By talking about the ways in which Manovich explores interactivity as myth — “Manovich argues that the idea of interactivity is too board and meaningless. He states: ‘Once an object is represented in a computer, it automatically becomes interactive. Therefore to call computer media “interactive” is meaningless—it simply means stating the most basic fact about computers’ (55). Because modern interfaces allow users to have real-time control, computers and the information within are interactive. Manovich makes a distinction between physical interaction and psychological interaction” — Chvonne made me wonder about how we apply the term interactive far too often. We hail objects like talking Barbie dolls and video games as interactive without taking into account that we can physically interact with a great many objects (from toys to tools). A Barbie doesn’t need to have recorded sound to be interactive, physically or psychologically, and a story can be interactive without being embedded in a video game.

Another Step Towards Winter Break

Creating Stories is My Story

Unleashing my imagination...will it frighten? Intrigue?

Our Piece of Their World
Dawn Wink: Dewdrops

Musings, insights, and advice on the written word for writers and readers from an aspiring novelist, published writer, and English teacher...whose dogs run her life

Narrative in games and new media

Your creative resource for teaching English in Japan

Druidry in the Modern World - My Journey

Writing and Other Adventures

bitching for a better tomorrow

An independent video game studio in Portland, OR

"Let me live, love and say it well in good sentences." - Sylvia Plath

Thoughts on fandom, academia and the PhD process